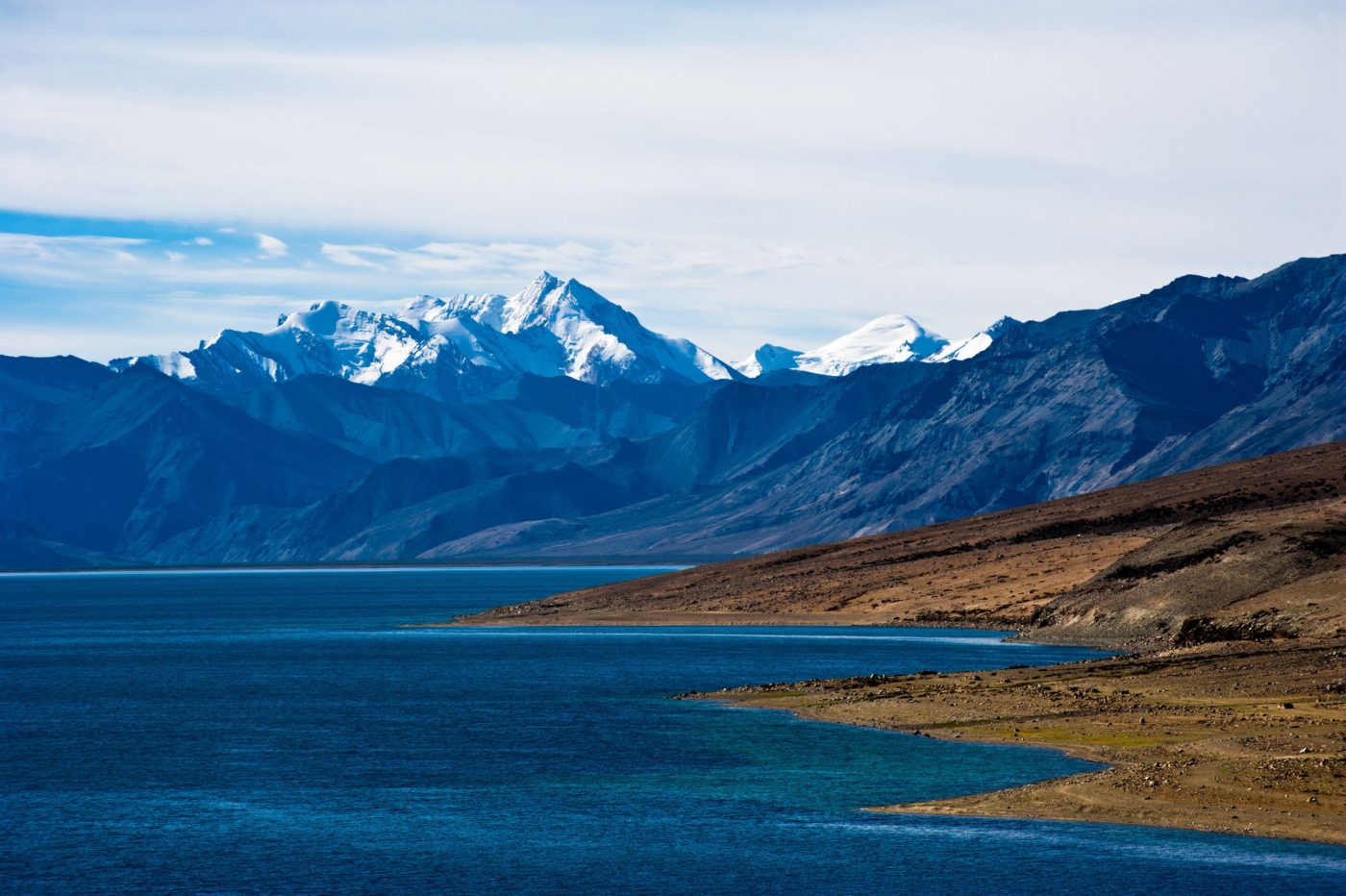 Glacial lakes in the Himalayas are becoming increasingly unstable and at risk of flooding, a trend evident in regions as far apart and different as the Everest area and Ladakh’s arid upland deserts, two recent studies have found.

Glacial lake outburst floods (GLOFs) happen when glacial meltwater breaches the natural dams that a lake sits behind. According to researchers at the University of Potsdam, “Sustained glacier melt in the Himalayas has gradually spawned more than 5,000 glacier lakes that are dammed by potentially unstable moraines.”

GLOFs are extremely unpredictable, as they can be triggered by sudden pulses of meltwater. They can also be highly destructive as they surge downhill carrying rubble that destroys lives, homes and the fragile landscapes that locals and wildlife depend upon.

Furthermore, climate change is increasing the number of supra-glacial lakes, small bodies of water that sit on top of glaciers, hemmed in by rock debris, and which tend to exacerbate the overall instability of the ice. 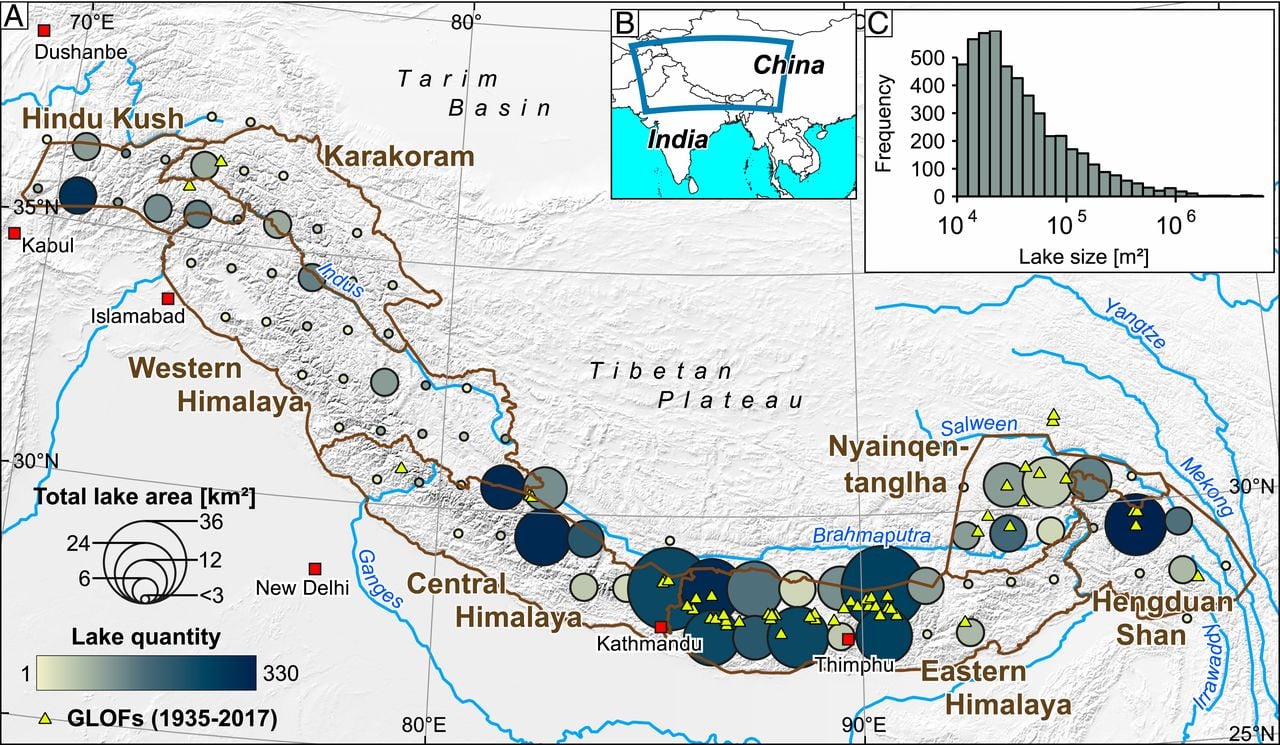 Moraine-dammed lakes in the Himalayas. Bubbles are scaled to the total lake area, and colour-coded to abundance. Reported GLOFs (yellow triangles) have occurred most frequently in the past eight decades in regions where glacier lakes are largest (Image: ‘Hazard from Himalayan glacier lake outburst floods’, PNAS, www.pnas.org/content/117/2/907_)

Anatomy of a GLOF in Ladakh

The first of the two new studies assessed changes over time to the Gya glacier in Ladakh, in northwest India. In 2014, this was the site of a GLOF when the glacier’s lake burst, hitting Gya village, carrying away a bridge and destroying houses and farmland 14 kilometres downstream. Fortunately there were no fatalities, although other GLOFs have taken lives.

Researchers from the University of Kashmir, Srinagar, analysed satellite data from 1969 to 2019. Using this, and interviews with villagers, they reconstructed the August 6, 2014 flood with computer modelling.

5,000 Glacial lakes that are dammed by potentially unstable moraines in the Himalayas

They found that the total glacier area shrank by 45.6% in the 50 years to 2019, while the Gya lake nearly quadrupled in size from 3 hectares to roughly 11 hectares in the same period.

Roughly 25% of the Gya glacial lake’s waters poured out in the 2014 flood, inundating about 4 square kilometres around the village. However, “a future worst-case GLOF could be 5.5 times larger than the 2014 event,” said Irfan Rashid, senior assistant professor at the University of Kashmir’s department of geoinformatics, and one of the authors of the study.

The team’s modelling shows that in the worst outburst scenario, up to 60% of the current lake water could be released, reaching Gya village in less than 20 minutes. “This study could be useful not only in planning disaster-resilient infrastructure around proglacial lake environments in the cold-arid Ladakh but also in framing mitigation plans to reduce risk for vulnerable downstream communities,” Rashid said.

The team’s findings add weight to an earlier study of the western Himalayas by the Wadia Institute of Himalayan Geology at Dehradun, which used satellite photos of the 252 glaciers in the Suru sub-basin in Jammu and Kashmir from 1971 to 2017. It found glaciers in the area had been degenerating over the 46 years studied. However, the process accelerated after 2000, leading to glacier shrinkage, plus more exposed rock debris – which can increase the destructiveness of GLOFs.

However, the risk of GLOFs from degenerating glaciers is greatest in the eastern Himalayas: the risk is three times higher than

in any other Himalayan region, according to the researchers from the University of Potsdam.

They also used satellite imagery to measure the number of supra-glacial lakes in the Everest Himalaya between 2010 and 2019, and found the overall water surface expanded by roughly 0.08 sq km a year.

The increases are due to global warming, glacial ice melting and changes in snowfall patterns, said Sabyasachi Maiti, assistant professor of geology at IIT in Kharagpur.

“The monitoring of such lakes is challenging, as they are dynamic [or shifting],” he told The Third Pole. Out of 2,424 lakes studied, only 161 were found to be constant. These lakes are continuously increasing in size and may join to form bigger lakes, the IIT team found. They observed clusters of lakes forming at higher levels, due to increasing temperatures, and decreasing glacier slope and ice thickness.

The more consistent lakes are concentrated mostly in the lower part of the lower areas or “ablation zones”, where there is a net loss of ice (that is, more ice is being lost due to melting than is being added).

In practical terms, travellers and mountain tours to Everest may have difficulties locating their fixed base camps because of the lakes, Maiti said. The implications of this are significant, given Everest expeditions generate more than USD 300 million a year for Nepal.

“In the short term, this study can be a guide to the Nepali government for deciding the most stable and safe location for Everest base camp, considering the immense demands of sports activities. Most of the large glaciers of the Himalaya are debris-dominated and supra-glacial lake formation is prevalent,” he said.

The IIT study also found that immediately after the 2015 Nepal earthquake, the number of supra-glacial lakes increased. “Indirectly, this indicates that the combination of global warming and earthquakes may cause a future severe hazard in foothills areas. More studies would be required for future policy implementation,” he said.

Rashid said that out of more than 50,000 glaciers in the Himalayan ranges, only 24 glaciers have their mass balance monitored in-situ.

For the northwest Himalayan region, there are no long-term mass balance records, he said.

What is mass balance?

And although several scientific studies have previously reported the expansion of glacial lakes and the formation of new ones, only two Himalayan glacial lakes have any kind of continuous monitoring mechanism: South Lhonak in Sikkim in India and Imja in Nepal. Rashid added that GLOFs in the Indian Himalayas have been studied less than those elsewhere in the Himalayan arc.

Other scientists are also calling for more monitoring networks. A March 2020 report on the hazardous surge of the Shispare glacier in the Karakorum range between 2017 and 2019 (it formed an ice-dammed lake and created a small GLOF), recommends regular monitoring for potential GLOF warnings. “The absence of in-situ observations leads to poor understanding of the processes that translate into a disaster like GLOFs and their downstream impacts,” leading to a greater degree of uncertainty, said Rashid. 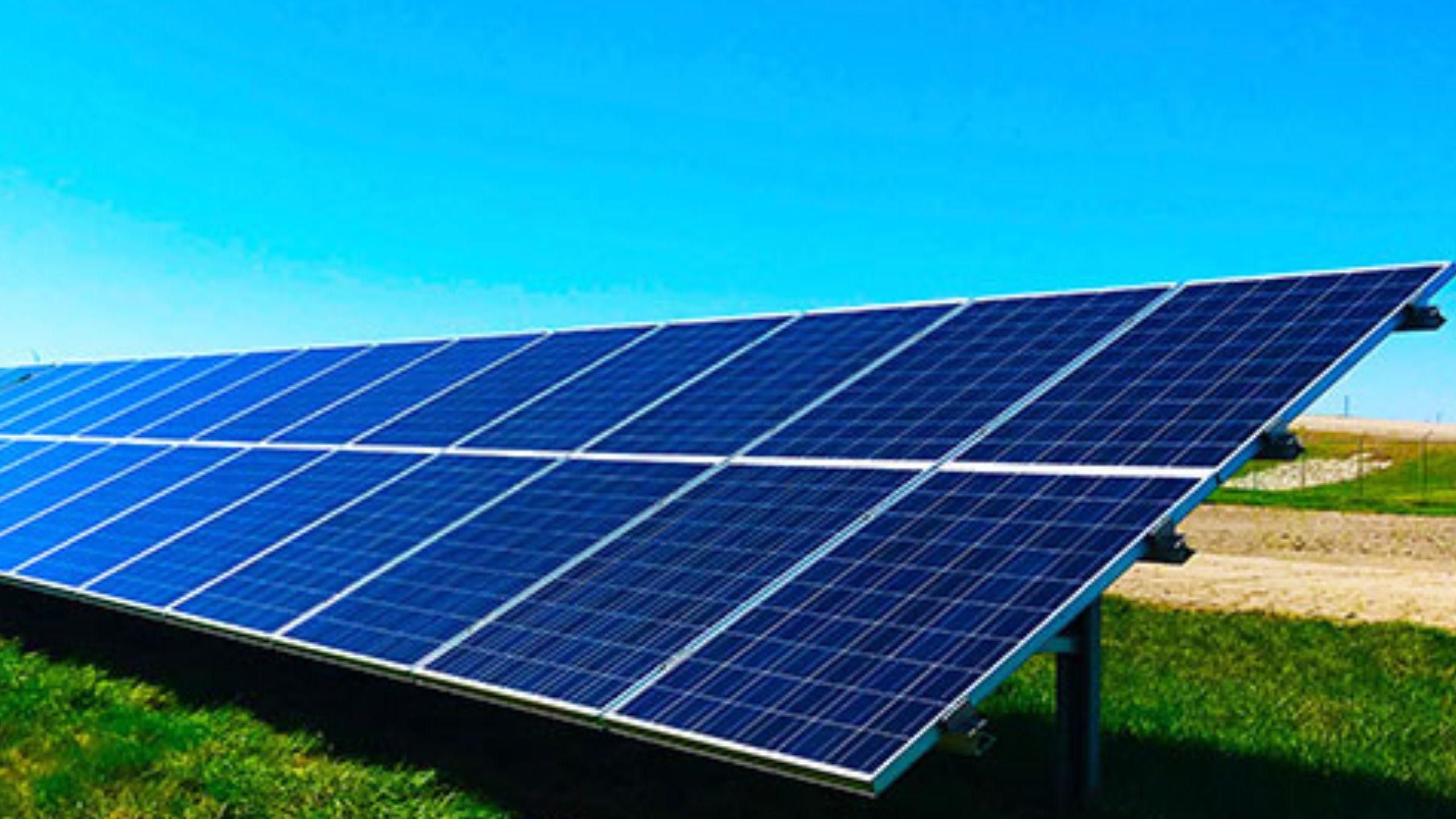 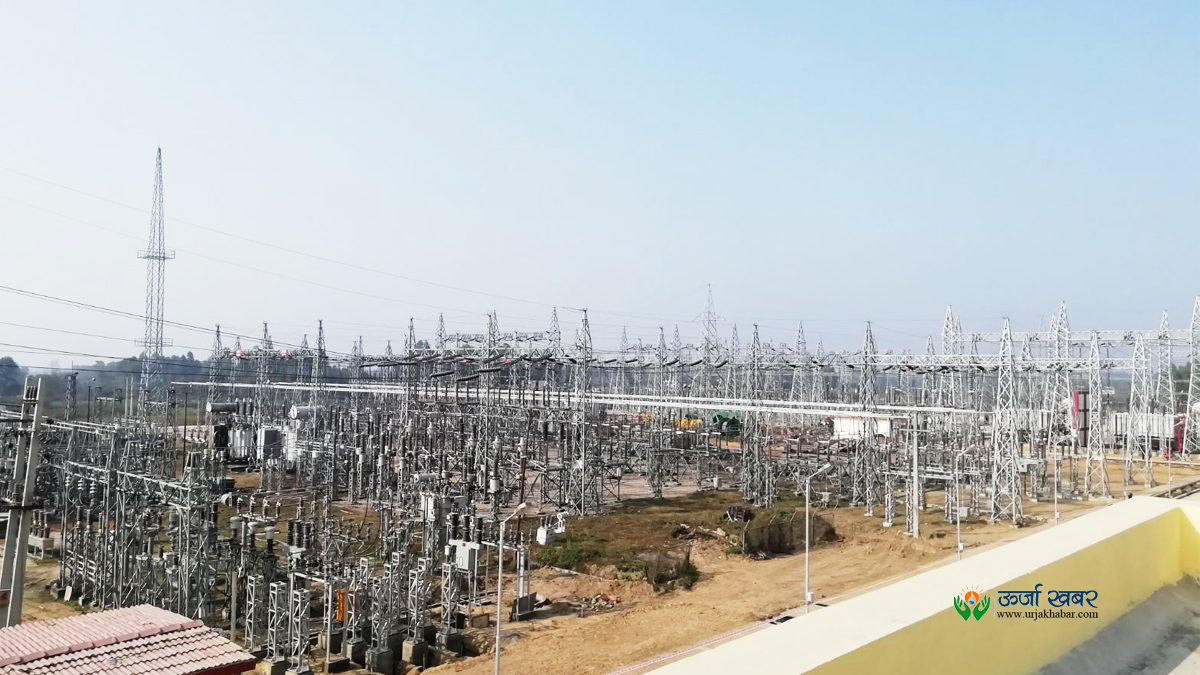 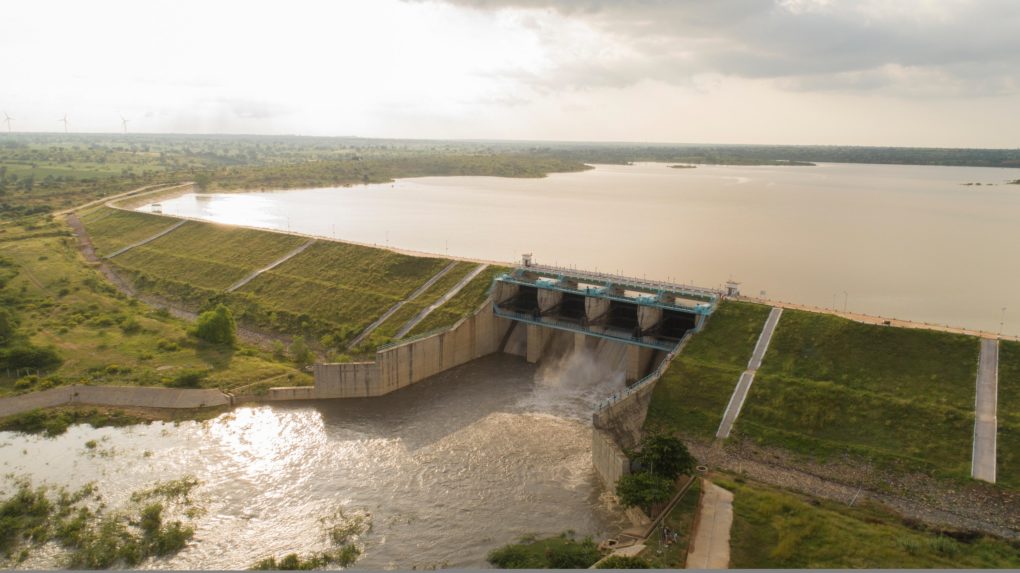