On May 22 1911 at around 6:30 pm, the erstwhile King of Nepal Prithvi Bir Bikram Shah inaugurated Nepal’s first and South Asia’s second hydropower in Kathmandu by turning on the lights in Tudikhel located at the centre of the city. The Chandra Jyoti Electric Power station, named after the then Prime Minister Chandra Shumsher Rana, had an installed capacity of 500 kilowatts and took about four years and nearly one-million-days of work to complete. Built to light the palaces of the autocratic Rana rulers, the power station used water from two spring sources 12 kilometres south of Kathmandu.

Despite this early start, Nepal failed built its second hydropower project only 28 years later. In 1939, a second hydro project of 640 kilowatts was built in northeast of Kathmandu. This was built to allow the autocratic rulers to live in luxury, rather than to provide electricity for the general population. The country only produced one megawatt of electricity in the first 50 years.

Over the past century, Nepal ‘s hydropower development has been sluggish, with current power production only at 1,400 megawatts. Nearly one third of the country’s power is met by importing energy from India—its southern neighbour.

Sadly, the history of the oldest hydropower dam has been almost forgotten and it now only delivers water to residents of the southern Kathmandu valley. In 2011, the government of Nepal declared it a living heritage site but not much has been done to preserve the area. The old palace and guest houses have cracked or crumbled into pieces. The power station has been poorly maintained and the road reaching the site is yet to be completed. Rusted old metal pipes are scattered near the water storage pond. As one local said, “We Nepalis don’t understand the value of precious things”. 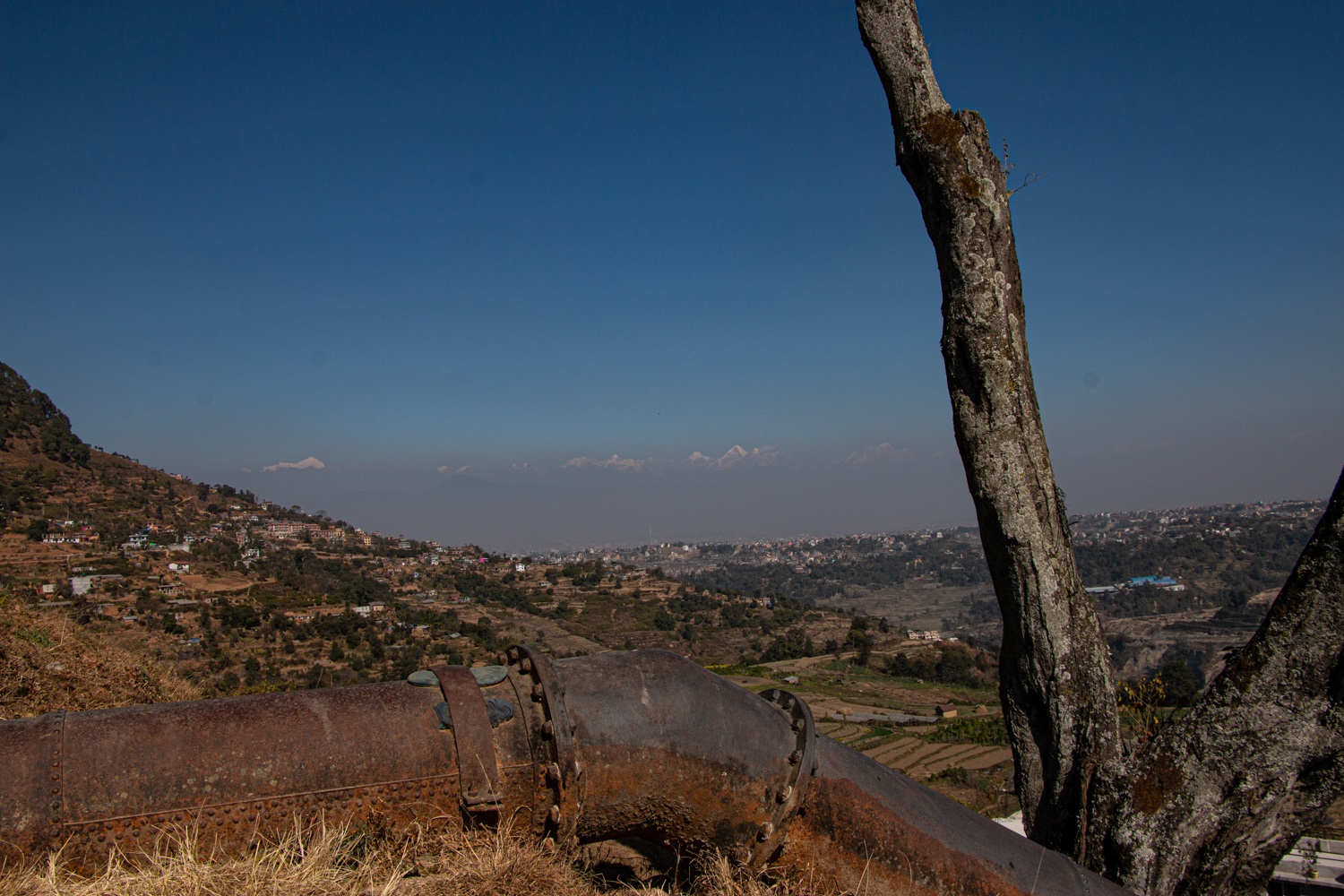 Rusted pipes that transport water from the pond to the powerhouse and the city of Kathmandu [image by: Ramesh Bhushal] 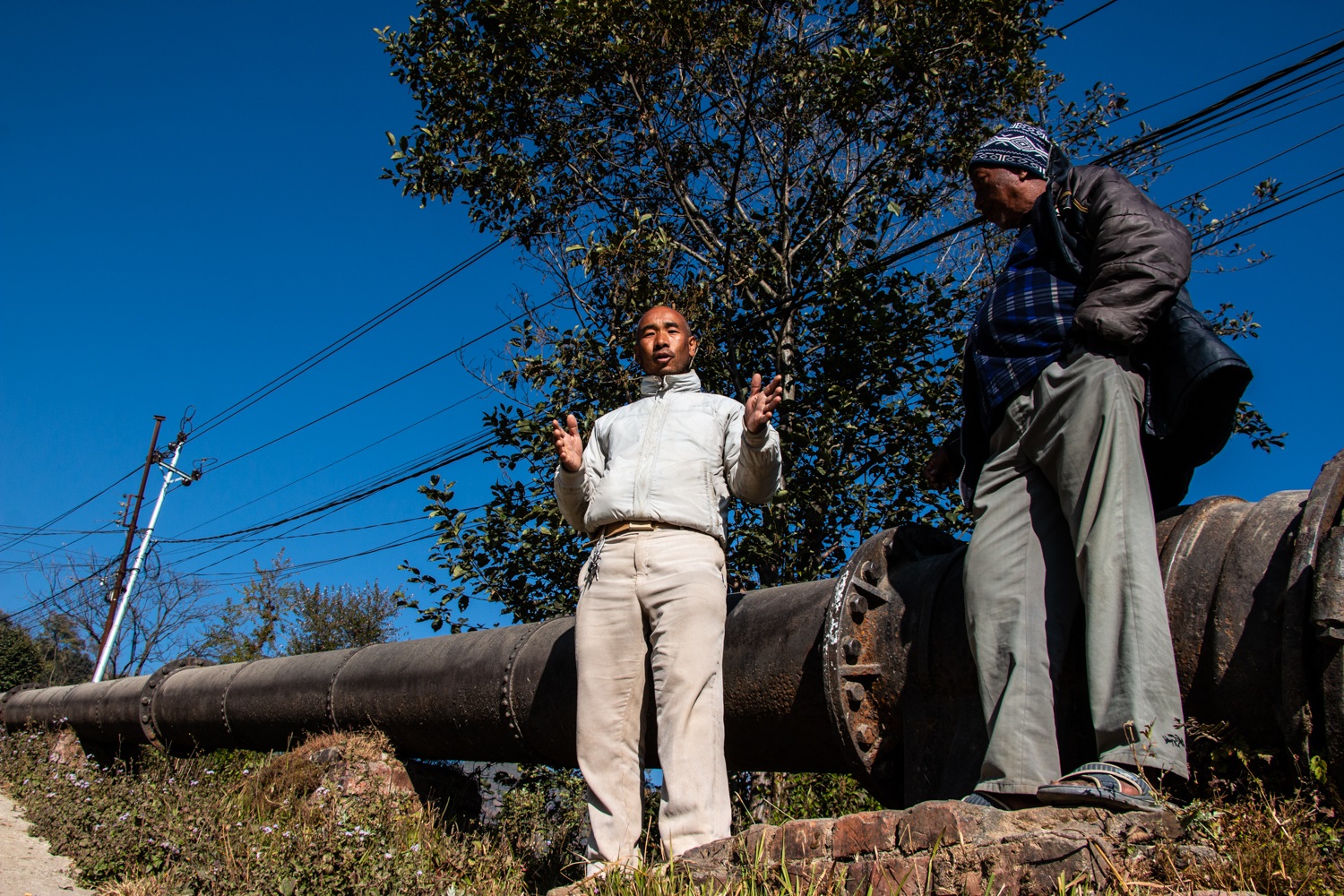 Raj Kumar Shrestha and Kanchha Balami stand for morning chat next to the metal pipe near to their houses. ‘We were not allowed to touch these pipes back then as said by our father. There used to be a person who used to ride horse and do surveillance of these pipes day and night,’ recalled Kancha Balami about the early days of the project [image by: Ramesh Bhushal] 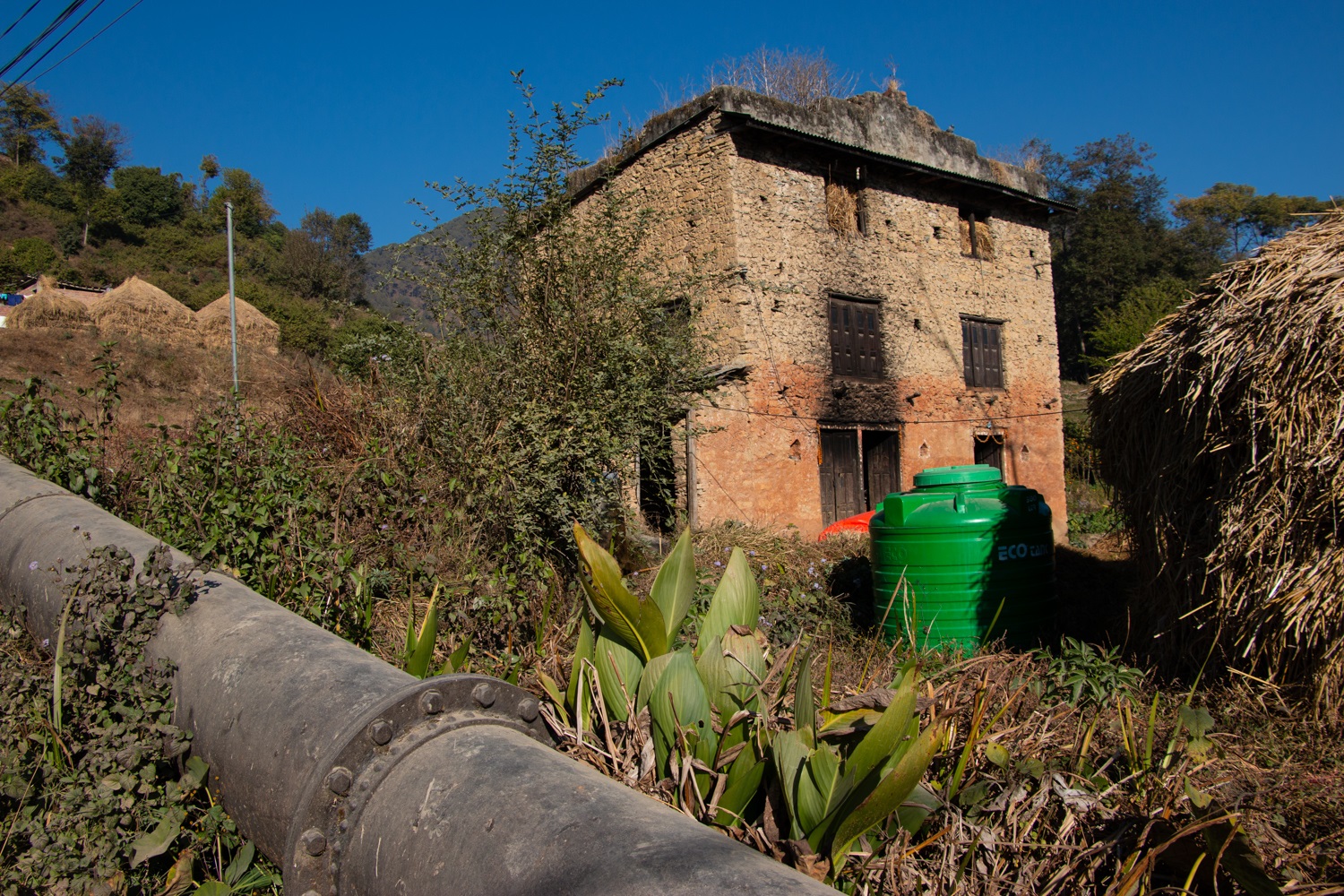 An old house stands just next to the metal pipe of the hydropower project [image by: Ramesh Bhushal] 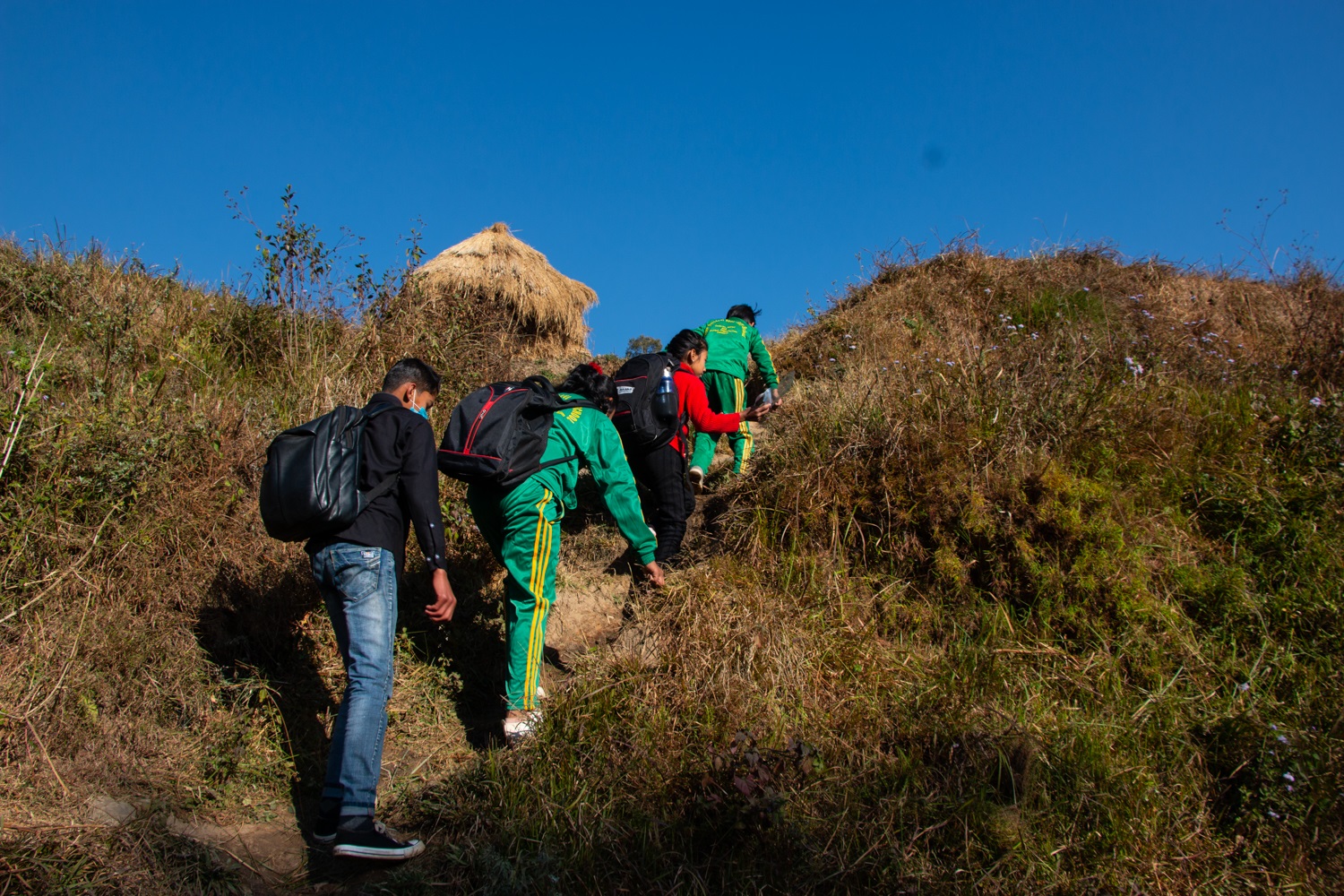 Children from Sokhel village where the hydropower project is located go to school by using slippery and narrow pathways as a short cut [image by: Ramesh Bhushal] 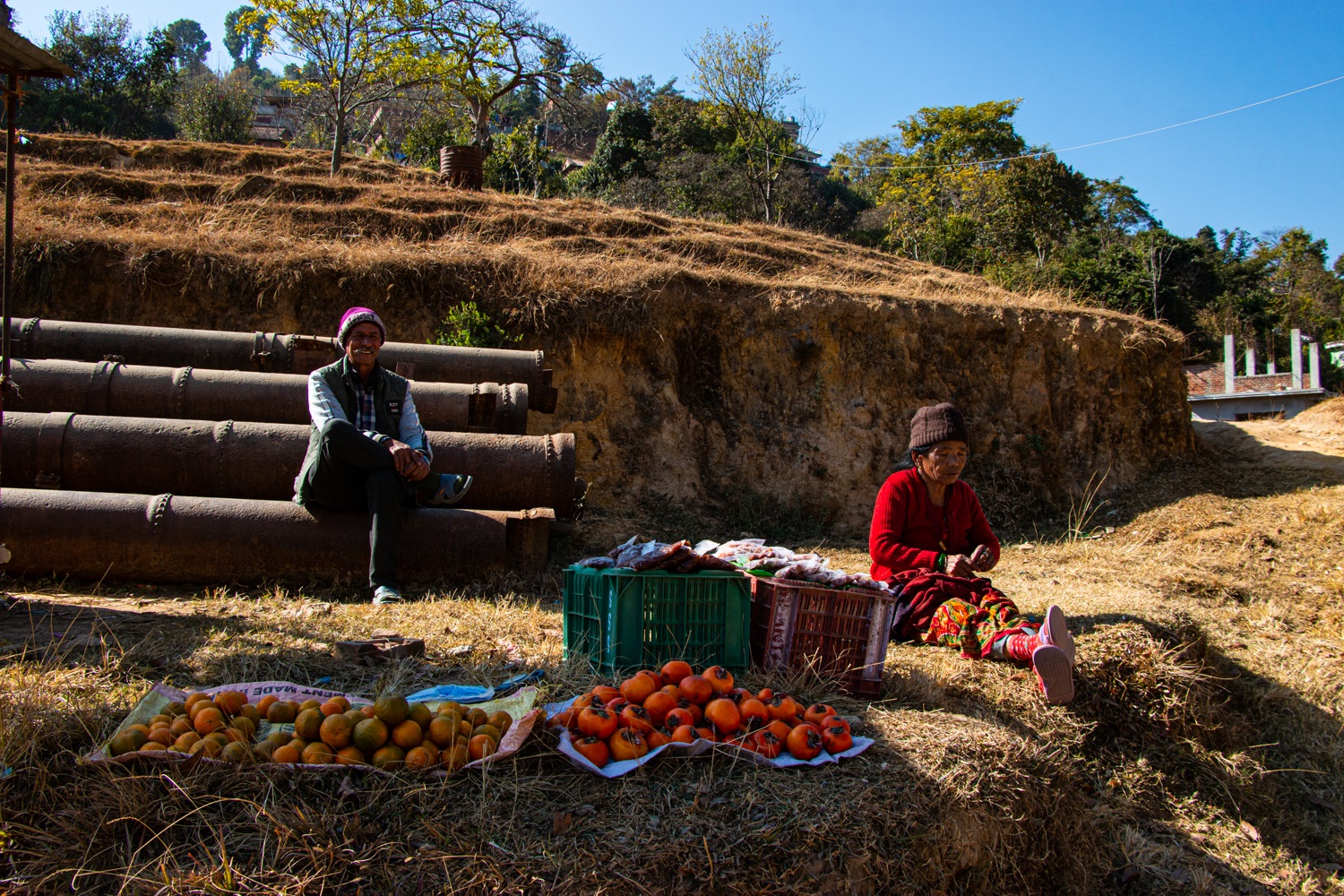 Ram Hari Khatri of Sokhel village selling oranges from his house to the visitors who come to see the hydropower station [image by: Ramesh Bhushal] 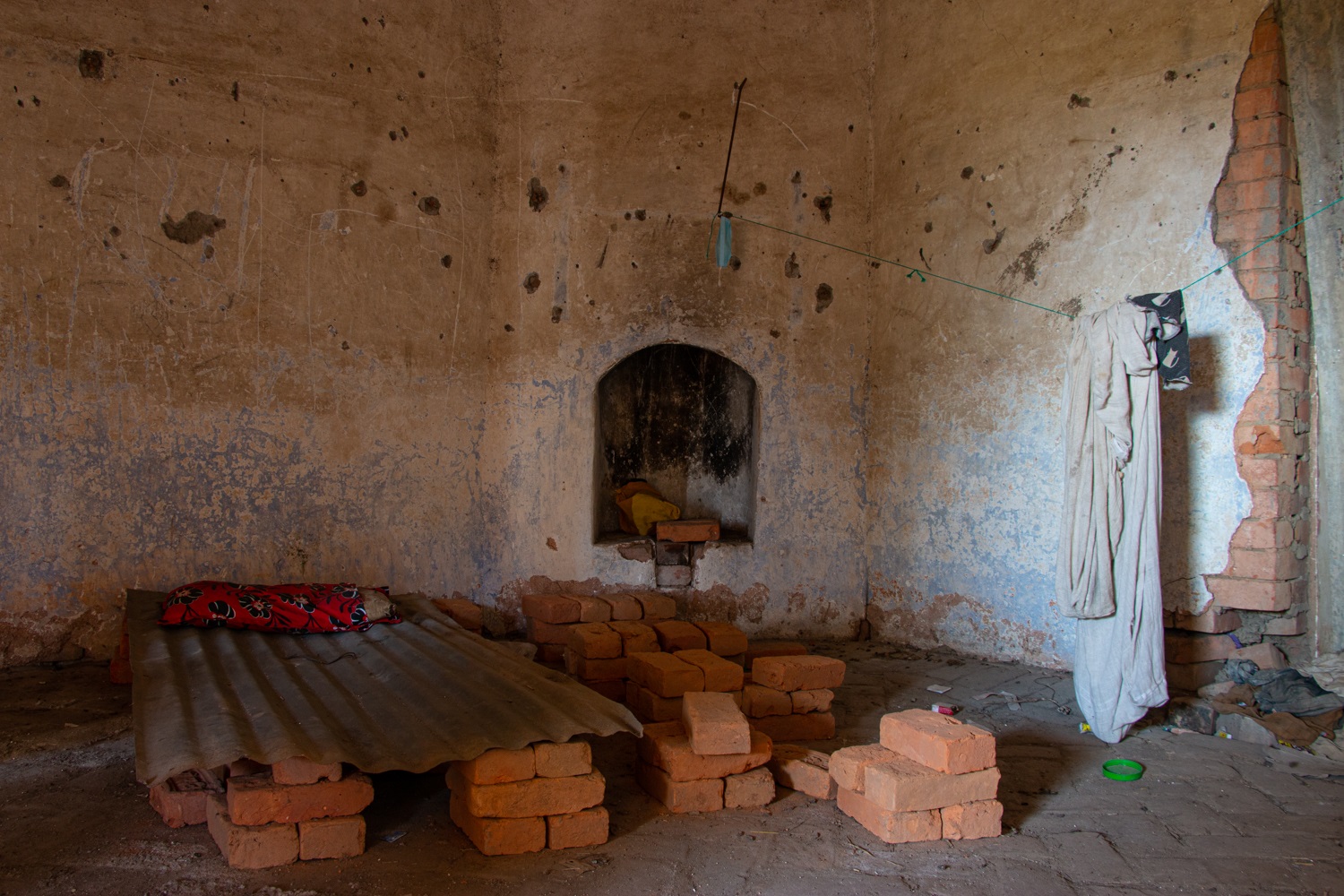 Temporary brick made bed and tin sheet inside one of the guest houses where some labourers recently slept while constructing staff quarters for the Nepal Electricity Authority (NEA). NEA handles the main power station that was declared as a living museum in 2010 by the government of Nepal [image by: Ramesh Bhushal] 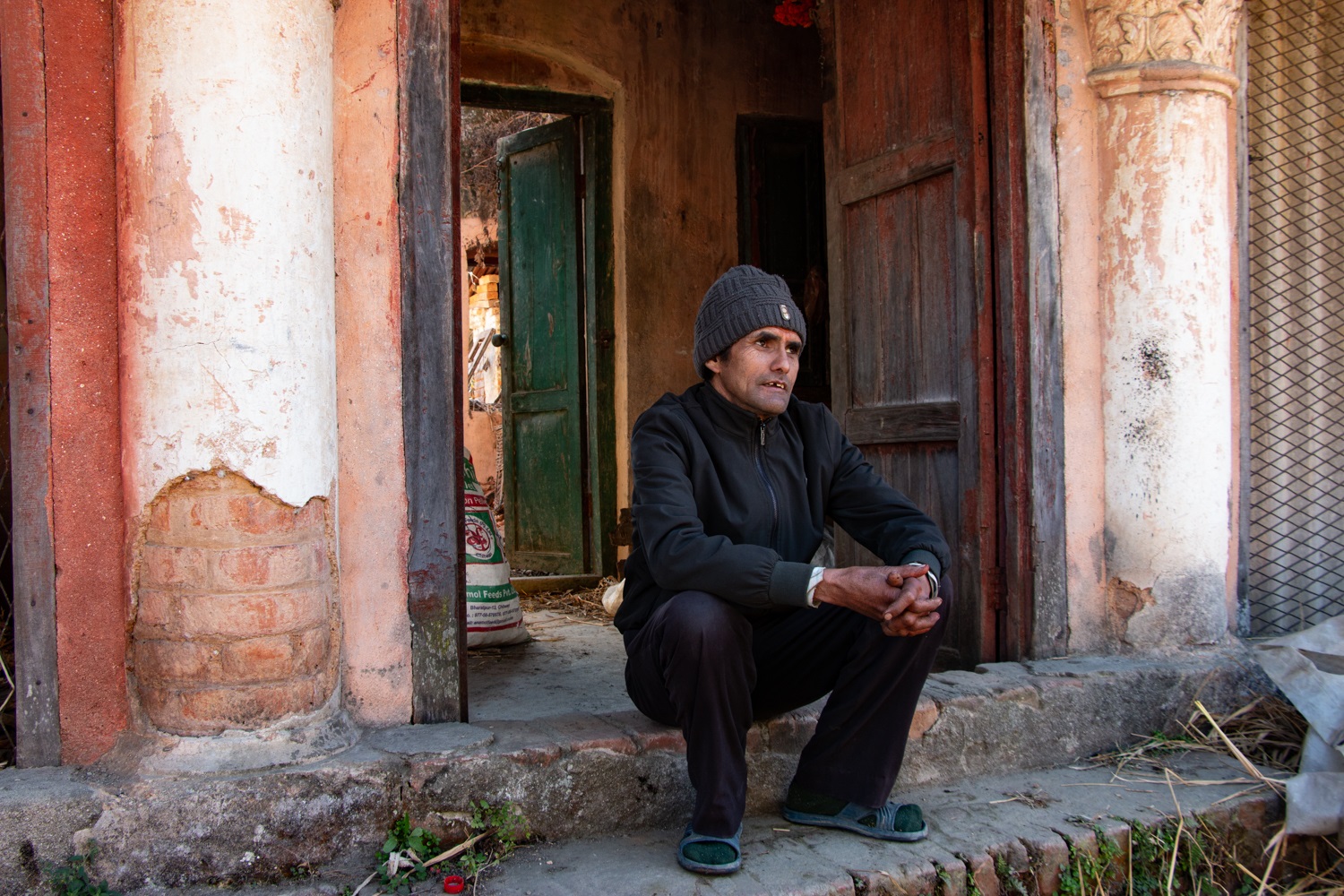 54 year old Kumar Acharya sits on the door of the cracked guest house. He has been guarding the property and is an employee of Nepal Electricity Authority [image by: Ramesh Bhushal] 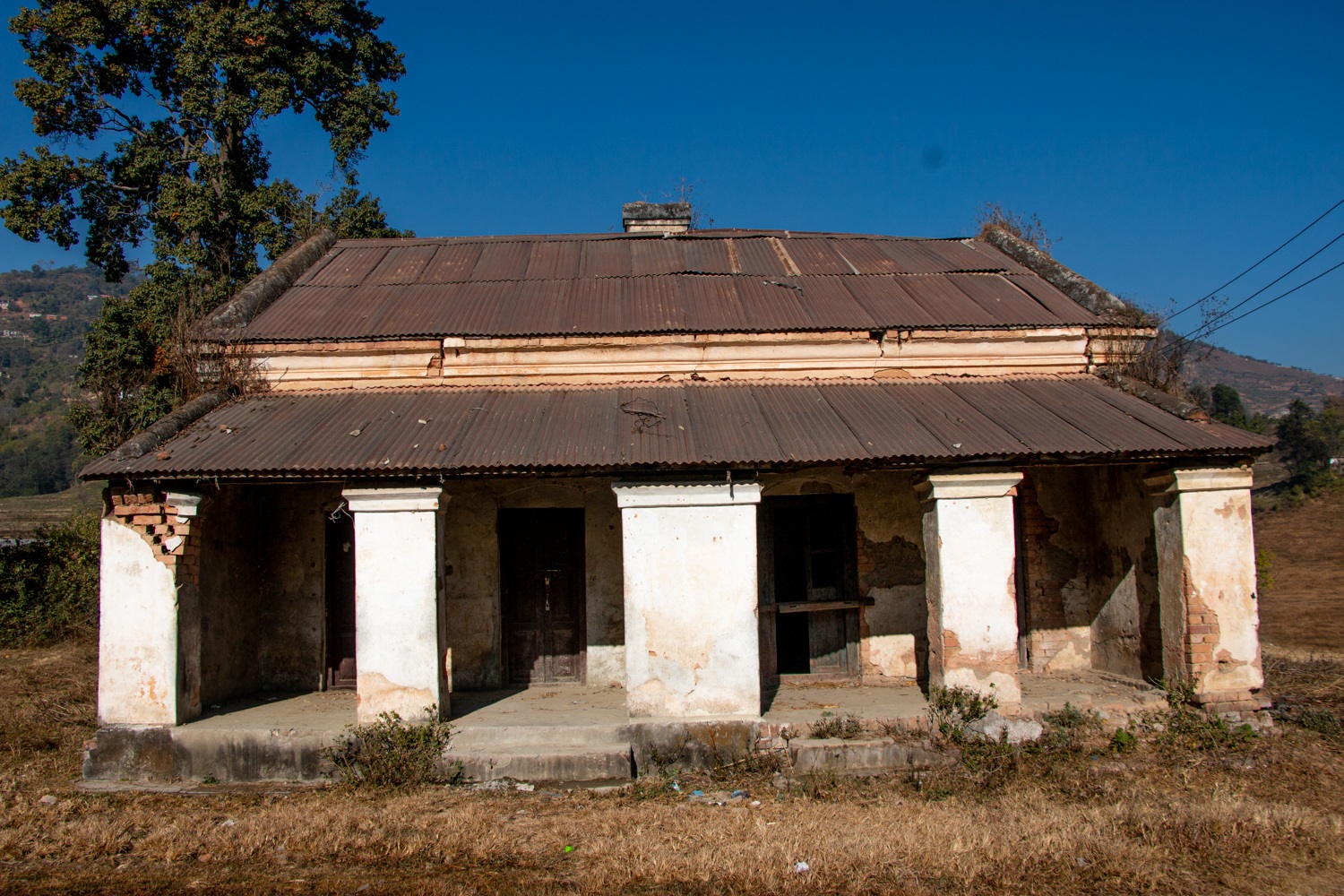 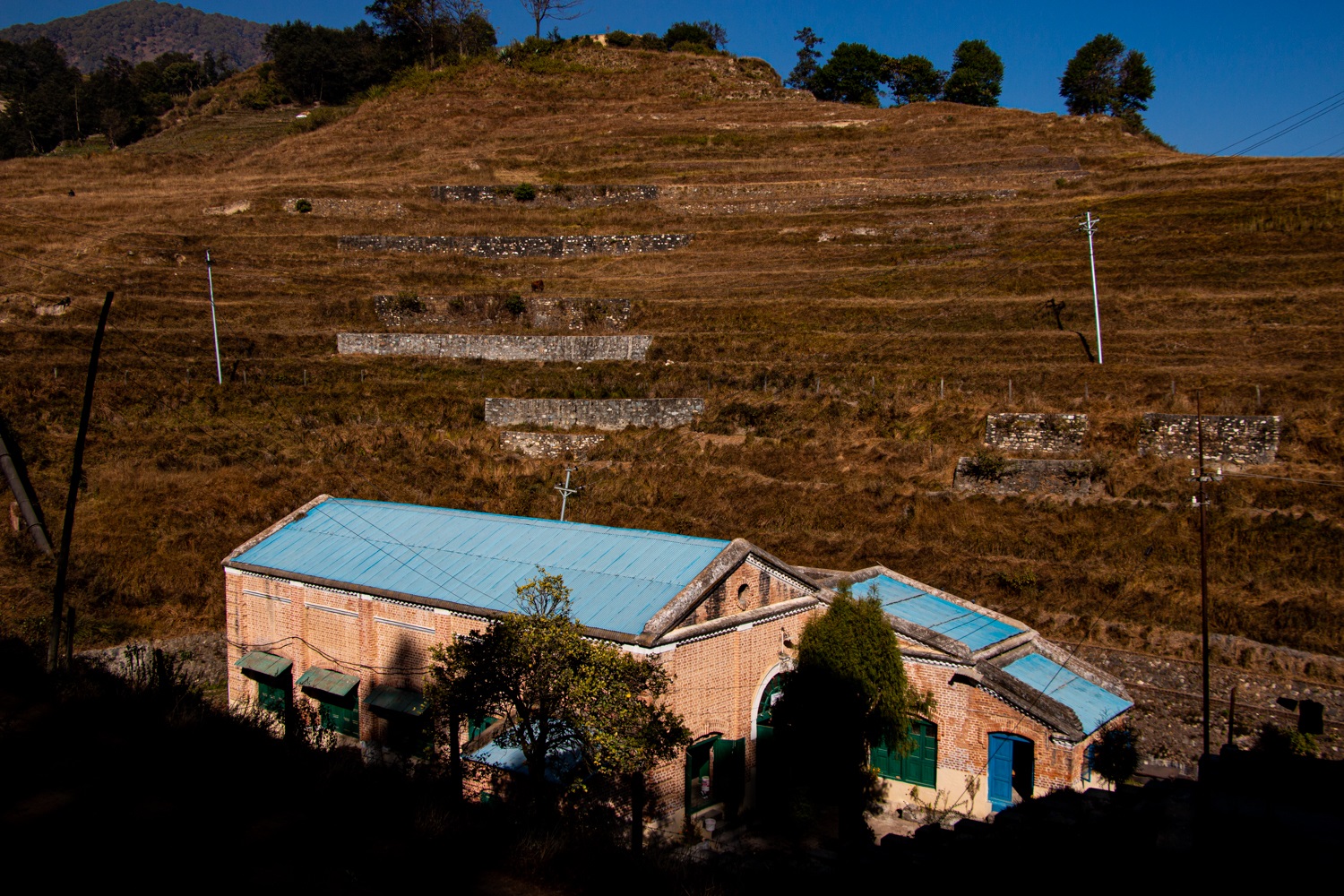 The Chandra Jyoti Hydropower station located a few hundred metres away from the Bagmati river that flows through Kathmandu city [image by: Ramesh Bhushal] 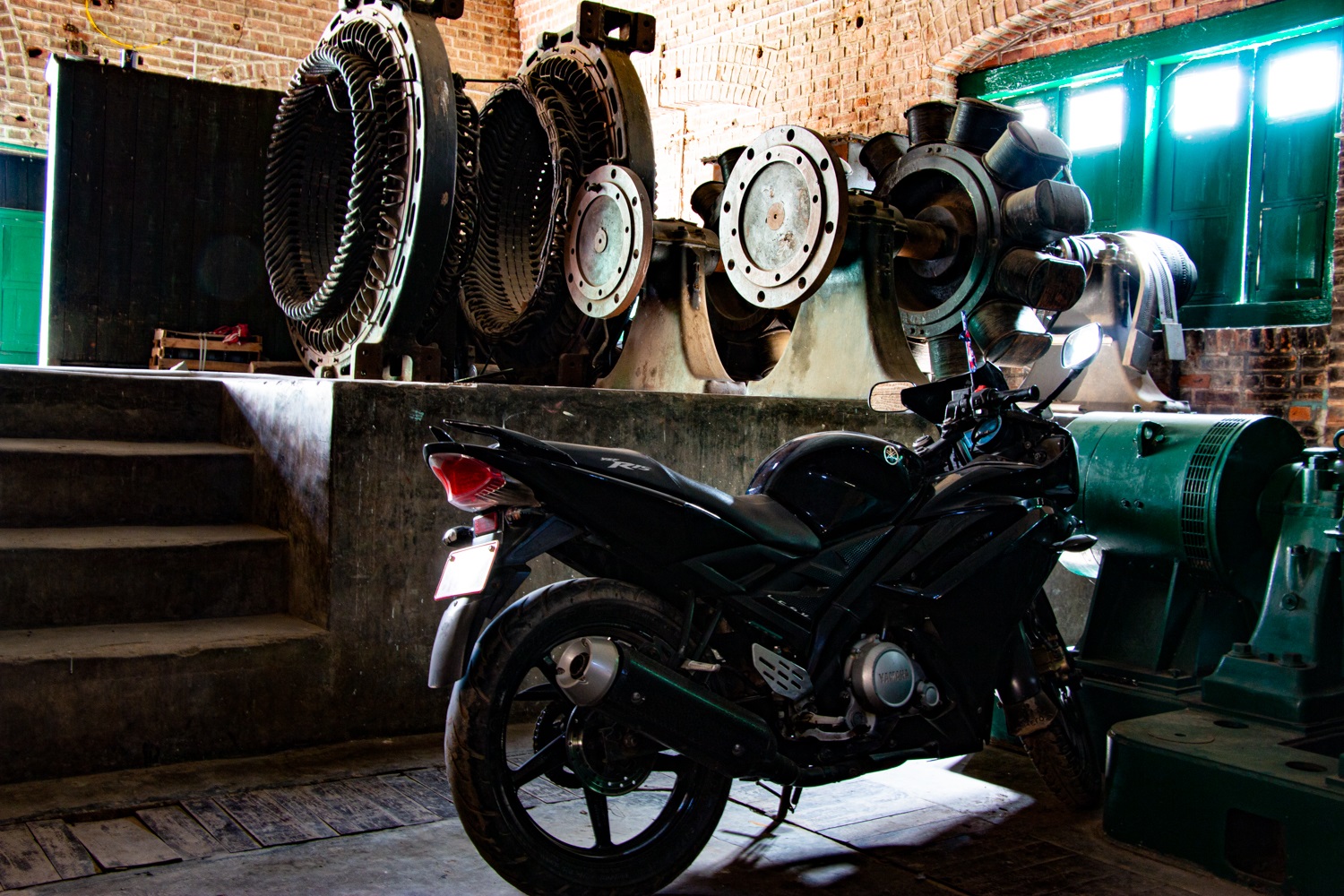 One of the generators and electrical parts kept to show the visitors in the hydropower station [image by: Ramesh Bhushal] 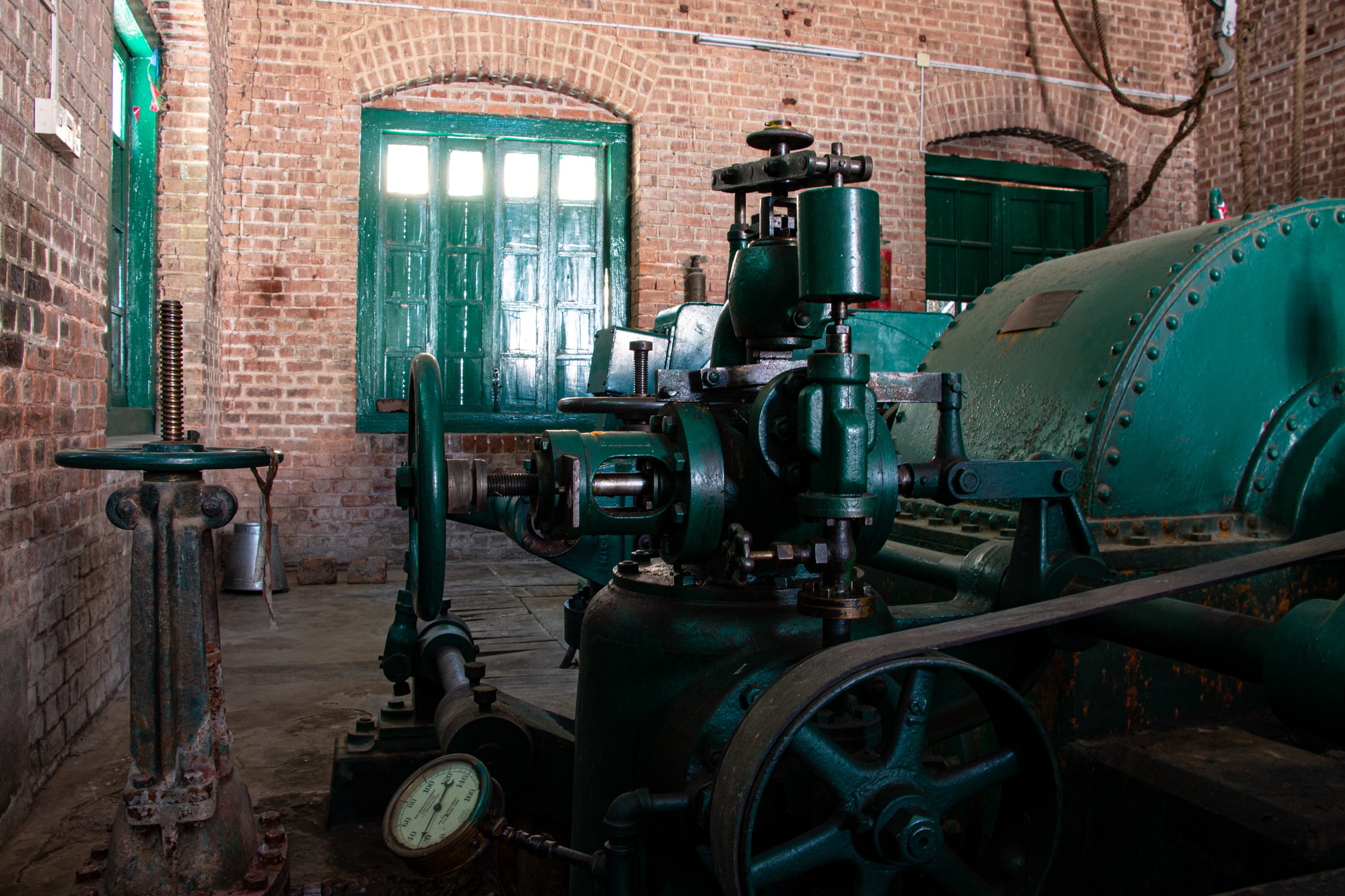 One of the generators of the hydropower station which is not in operation but is kept for visitors [image by: Ramesh Bhushal] 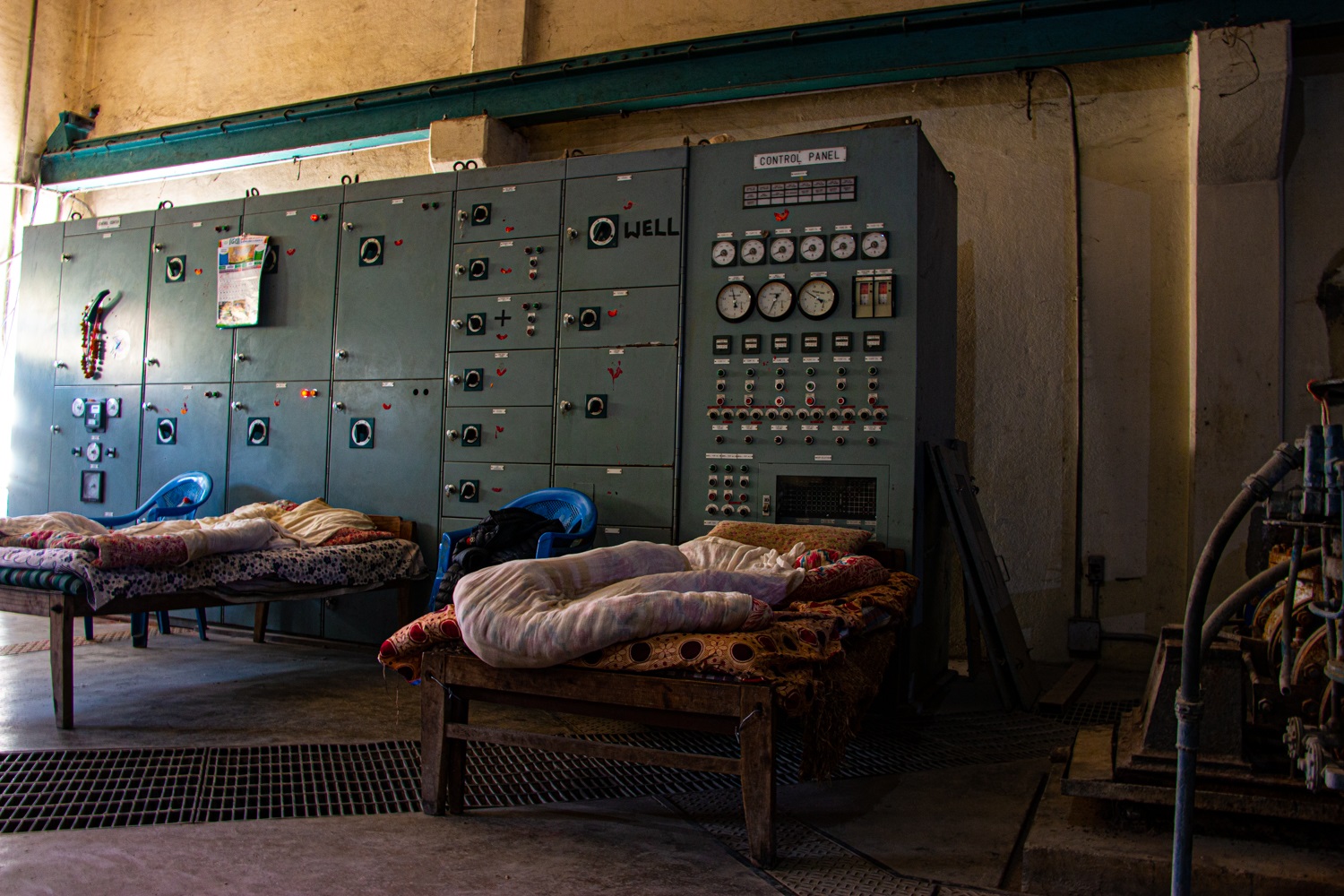 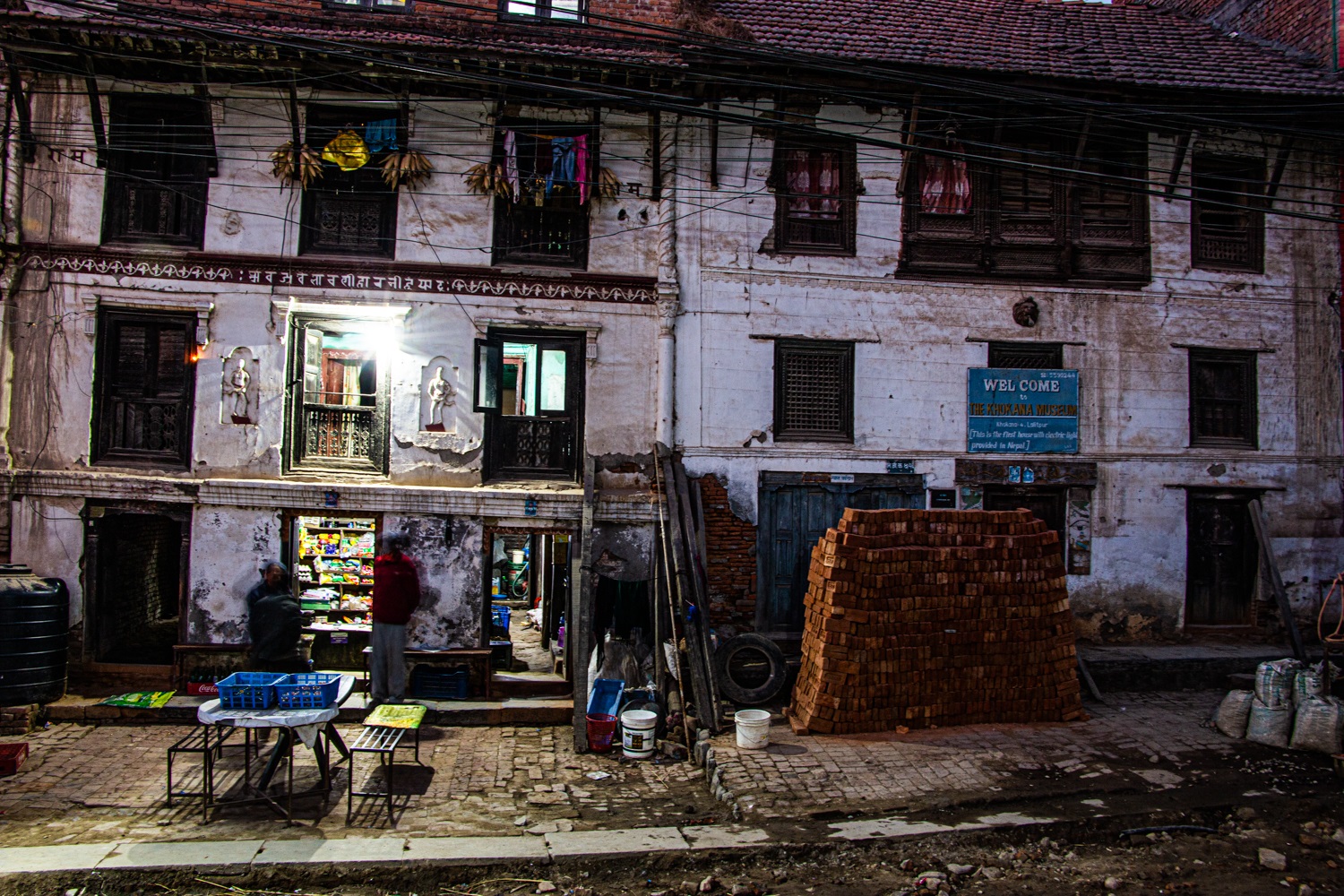 The first house that was provided with electricity in Khokana, located a few kilometres away from the power station. The Ranas wanted to test whether it was safe to use it before installing the wires into their palaces, so they provided electricity to Madan Krishna Maharjan’s house in Khokana village. The house on the right is now abandoned as its walls were cracked during the 2015 earthquake. But a board above the door reads, “Welcome to the Khokana Museum, this is the first house with electric light provided in Nepal” [image by: Ramesh Bhushal]